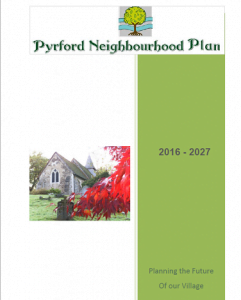 96.5% of residents voted Yes to adopt the Neighbourhood Plan.

Thankyou to all the Pyrford residents who turned out to vote.

A large majority Yes vote of 96.5% was received in Referendum to adopt this plan.

Woking Borough Council Pyrford Neighbourhood Plan –
Decision Statement
Date of Publication – 20 October 2016
Following an independent examination of the Pyrford Neighbourhood Plan and the receipt of the Examiner’s Report, the Council at its meeting on 20 October 2016 decided that subject to the Examiner’s proposed specific modifications, the Pyrford Neighbourhood Plan should proceed to referendum for the following reasons; the Neighbourhood Plan:
• will be compatible with the European Convention of Human Rights, and in particular, to Article 8 (privacy); Article 14 (discrimination); and Article 1 of the first Protocol (Property);
• will not breach, and is otherwise compatible with European Union obligations;
• is not likely to have significant effect on a European designated site or a European Offshore Marine site either alone or in combination with other plans or projects;
• taken as a whole has regard to national policies and advice contained in guidance issued by the Secretary of state and would contribute to the achievement of sustainable development;
• is in general conformity with the strategic policies contained in the Development Plan for the area;
• meets the Basic Conditions; and
• has undergone consultation in accordance with the requirements of the Regulations.
The Council also agreed with the Examiner’s recommendation that the referendum of the Neighbourhood Plan should be based on the designated Neighbourhood Area approved by the Council on 13 February 2014.
This Decision Statement, the Examiner’s Report, including the proposed modifications and the Pyrford Neighbourhood Plan can be viewed on Woking Borough Council’s website (www.woking.gov.uk) and the Pyrford Neighbourhood Forum’s website. The documents are also available for inspection at the following venues:
• Woking Borough Council, Civic Offices, Gloucester Square, Woking , GU21 6YL – Monday to Friday 9am to 4.45pm
• Woking library. Please see www.surreycc.gov.uk for address and opening times of the libraries.
• Byfleet and West Byfleet libraries. Please see www.surreycc.gov.uk for address and opening times of the libraries.
For any questions please contact the Planning Policy Team on 01483 743871 or e-mail to planning.policy@woking.gov.uk.

Hello again everybody – please note the date of the 2016 AGM in your diary. This will take place on Friday 28th October 8pm at The church of the Good Shepherd. The past year has been one of both success and frustration but things have moved on satisfactorily and good progress has been made on all the issues raised at last year’s AGM. In the next 12 months we foresee that things will again change radically so we really do urge you all to come to the AGM for a summary of where things stand now and to help us map the way forward in 2017.
In addition to the normal officer and financial reports we will be discusssing: The Neighbourhood Plan – now on the brink of being adopted but what remains? By the 28th we expect the story to have moved on even further, so come and hear what happens next. The Site Allocations Issue – Do you want 400+ houses across the fields on Upshot Lane? Things are currently in a state of flux and a council meeting on 20th October could be a major turning point on this issue. We will review the situation and sketch out what we do next.
Pyrford Action Group – PAG have been very energetic on behalf of the community and we will have an update on their work and how it complements our own in the Forum. Relationship with the Residents Association – last year you were very helpful in encouraging us to explore how we could make the most of a close relationship with the RA. Well, we’ve made considerable progress so come and hear what is currently agreed and what we are currently working on.

Well we are into the final phase of getting the Neighbourhood Plan approved and adopted for inclusion in Local Planning Authority policies and guidelines.

On 14th July the WBC officers recommended to a full council that the Pyrford Neighbourhood Plan be put forward for Independent Examination.  The Examiner was impressed with the written submissions you all submitted and decided that no public hearing was necessary.  Accordingly he reported on the basis of the written submissions and on 8th August we received his report.  See https://pyrfordforum.org/plan-evidence-base/#more-643 for a copy of the full report.

Since then your Committee has reviewed the Examiner’s comment and are happy to accept all his recommendations and are looking to complete a final version of the Neighbourhood and agree it with WBC by 1 October.

Once this is achieved arrangements will be put in place to hold a Referendum where all local residents will be able to vote to approve the final version of the Neighbourhood Plan.  We expect this stage to be reached before the end of the year.

19th May 2016 – Receipt of second letter, from WBC, announcing that the Plan Consultation (Regulation 16)  period was being extended to 31st May because of technical difficulties with the response form provided.

22nd March 2016 – Pyrford Neighbourhood Plan Submission – The die is cast!  Following the local Regulation 14 consultation last year we considered all the comments very carefully and consulted with stakeholders in the community to come up with a final Neighbourhood Plan and supporting documentation:

See https://pyrfordforum.org/plan-evidence-base/#more-643 for full details in our Evidence Base.

March 2014 – Identification of issues and aims

REGISTER TO JOIN THE FORUM

Sign up to keep up to date with the latest news

The Committee has arranged its next AGM for Monday … END_OF_DOCUMENT_TOKEN_TO_BE_REPLACED

The annual Shepherd’s Market is on Saturday 12th … END_OF_DOCUMENT_TOKEN_TO_BE_REPLACED

If you were out on Pyrford Common on Sunday, the … END_OF_DOCUMENT_TOKEN_TO_BE_REPLACED

We have a Flickr site where you can view photos of our Village and the surrounding areas. You can even upload your own photos.

We would like you to upload photos that characterise the village and the things you like about Pyrford - views and buildings, etc. So follow the link here and get clicking!

Church of The Good Shepherd

B, WB, and Pyrford Residents Association